The Risks of Accepting a Counteroffer 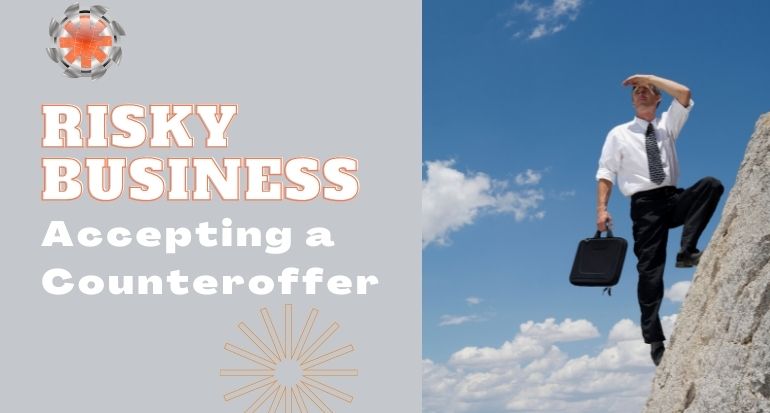 The Ugly Truth about Accepting a Counteroffer

Companies in the manufacturing industry often invest a lot in specialized training.  Because of this heavy investment in their workforce, not only do employees become valuable assets, but they are also prime targets for competitors and other headhunters.  When you are a valuable employee and you resign, your employer may not throw a party.  If they feel that you are especially valuable, or that it might cost a great deal to replace you, they may prepare a counteroffer. This counteroffer will make you feel flattered, but use caution.  Before you start wondering whether or not to take that sweetened deal, you have a few things to think about.

Research done by Christian &Timbers, a leading Performance Consulting firm, reveals that employees who accept a counteroffer typically end up leaving the firm within the next six months. The National Association of Personnel Consultants actually confirms that, saying more than 80% of employees who accept counteroffers are no longer working for that same company after six months.  It is really important to know if accepting a counteroffer will lead to a permanent solution or if it will just be a temporary fix.  You have to remember why you are considering leaving the company and think about what might be driving them to extend you the counteroffer.  There are many reasons why a counteroffer may be offered once you turn in your resignation, but most of them are not in YOUR best interest.

“The company’s motive for a counteroffer is usually to protect itself, the stability of the company or workgroup, and the project(s) that the resigning employee is currently working on,” says Seth O. Harris, a technologist and partner at Christian & Timbers.  Most of the time, counteroffers are made so the company can avoid the risk of losing productivity or revenue after you’ve left.  In this case, your worth as an employee seems to increase, but if that were true, why weren’t they paying you more in the first place?  If they truly valued you, they should not have waited for your resignation letter before they offered you a promotion or more money.  “I define a counteroffer simply as an inducement from your current employer to get you to stay after you’ve announced your intention to take another job,” states Paul Hawkinson, a publisher of the Fordyce Letter and a former recruiter, “counteroffers are usually nothing more than stall devices to give your employer time to replace you.”

Once you have made it clear that you want to move to a different employer, your loyalty will always be in question.  Once you’ve pulled back the curtain that you’ve been actively engaging in a job search, you are no longer considered a “team member” and you lose your place in the inner circle of the company.  The trust has been broken.

Another thing to consider, if you have accepted a job with another company, and then back out, you not only offend the recruiter, but you hurt your own reputation of knowing what you want and sticking to your decisions. Once you back out of an accepted offer from a new company, you can be sure of two things, first, your recruiter will no longer want to support you, and second,  the employer you backed out on will never consider you again. If you’re in a small niche, they could possibly bad-mouth you within your industry.  If this happens it could hurt your chances of finding employment once you have to resume your job search.

Don’t be this person! There is that rare person who thinks if they go out and get another job offer, they will then have the leverage to get a raise within their current company.  They conduct a job search and accept an offer with the primary intention of being able to get a counteroffer.  Not only is this unethical, but they are putting a lot at risk.  The probability this won’t come back to bite them is really not weighed in their favor.

So this is the ugly truth about accepting counteroffers. It is rarely a good idea, but in case you do accept the counteroffer, just make sure everything you have agreed upon in writing and signed is really agreeable to you.  Don’t be afraid to request some additional perks or benefits, or perhaps an even higher salary than the counteroffer proposes.  Even if all of your demands are met, keep in mind that the original issues that compelled you to leave may still be there. Make the best choice for your long-term career and professional growth and stick to your guns.

Have you ever accepted a counteroffer, only to realize you should’ve taken the other position when you had the chance?